GRAPE HARVEST 2021 IN LOMBARDY, STARTING AGAIN WITH THE OLTREPÒ PAVESE 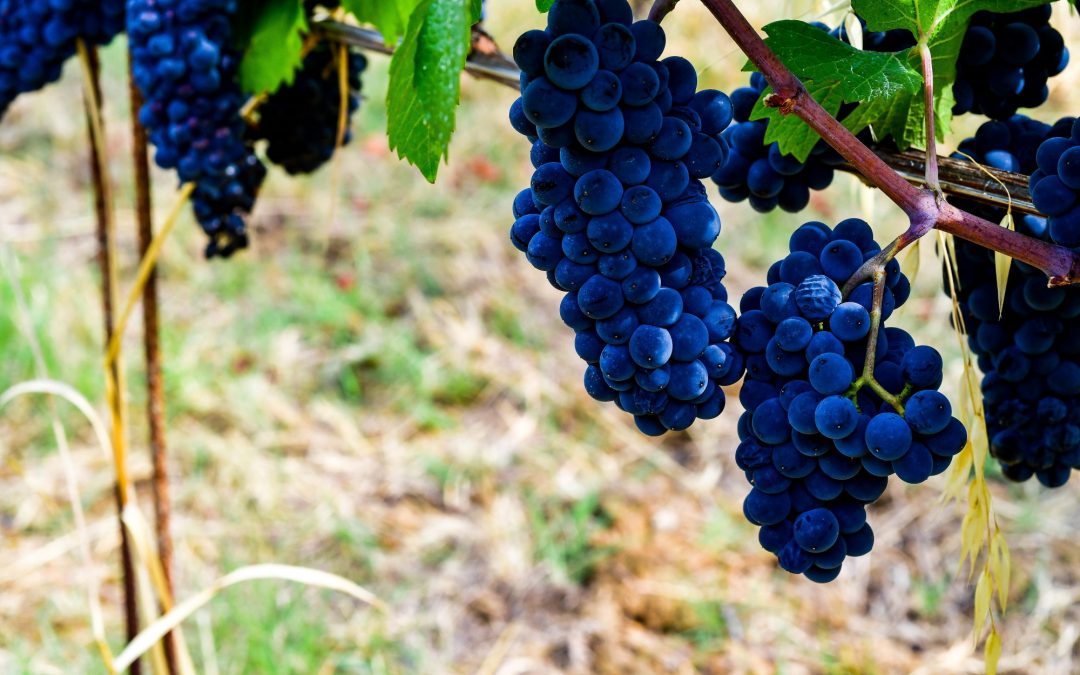 The 2021 grape harvest has begun. It starts again with Oltrepò Pavese from the hills of Montescano. The Councillor for Agriculture Fabio Rolfi: excellent quality, we need to enhance it properly . The President of Consorzio Gilda Fugazza: The beginning of the harvest is an important day, it is already a quality harvest. We will have a super Bonarda and an excellent Metodo Classico.

The official opening of the grape harvest on Wednesday 25 August 2021 in Montescano, in the Oltrepò Pavese area, was an opportunity to bring together the territory, producers and institutions around a table for discussion; a quality context for wine production that is slowly proving to be one of the most representative of the entire region in terms of landscape, agriculture and environment. The meeting was attended by representatives of the Consortia, local farms and the Pavia Chamber of Commerce, together with the Undersecretary of the Ministry for Agricultural, Food and Forestry Policies.

Gilda Fugazza, president of Consorzio Tutela Vini, was present at the official meeting in the Oltrepò Pavese hills, saying among other things: "It's an important and demanding day for the start of the harvest . We expect excellent quality, which will give us a super Bonarda and an excellent metodo classico. We have come a long way, and we are aware that we must make the most of all our Perle d'Oltrepò, products that can accompany us from appetizer to dessert, and on which to focus for the future of our wine world. These are the trump cards of a particularly sparkling Oltrepò: both for the classic method and for other products such as Bonarda and Sangue di Giuda, which are giving us good commercial satisfaction and represent us.

Carlo Veronese, director of Consorzio Tutela Vini Oltrepò Carlo Veronese, director of the Pavese wine-grower's association, said: " The harvest is only just beginning and at the moment we can see that the soil is too dry and the grapes are small with little juice inside. In any case, there is a great deal of emphasis on quality, which will be enhanced with respect for a territory that produces excellent wines, increasingly rewarded and recognised by international experts, as is happening at the moment with the sparkling wine tastings organised by Falstaff magazine, Austria's most important wine and food magazine. 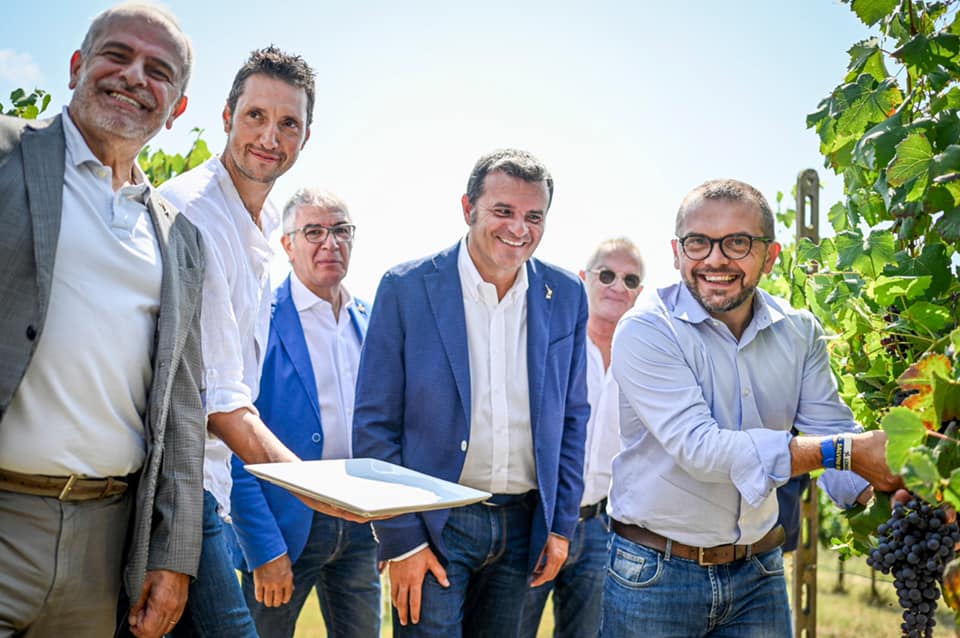 THE LOMBARDY OF WINES - Lombardy's production is characterised by a high level of quality and boasts 5 DOCG, 21 DOC and 15 IGT. This is evidenced by the large number of denominations present and by the incidence of Lombardy's Doc and Docg wines amounting to about 60% of the total regional wine production (a percentage almost double that of the national one).

Our proximity to the companies has been and always will be," explained Fabio Rolfi, Regional Councillor for Agriculture, Food and Green Systems, meeting producers and representatives of the consortia at Francesco Maggi's farm in Montescano. Today," he continued, "is a day of celebration, of harvesting after hard work. If we want to take stock halfway through the process, my opinion, two and a half years after the first round table in Oltrepò, is positive: many initiatives have been launched, from the new Consorzio, to the Riccagioia project that is taking its first steps towards a single centre of excellence for 4.0 agriculture; there is the issue of the IGT yields that Consorzio has recently resolved and which will be formally launched in September. 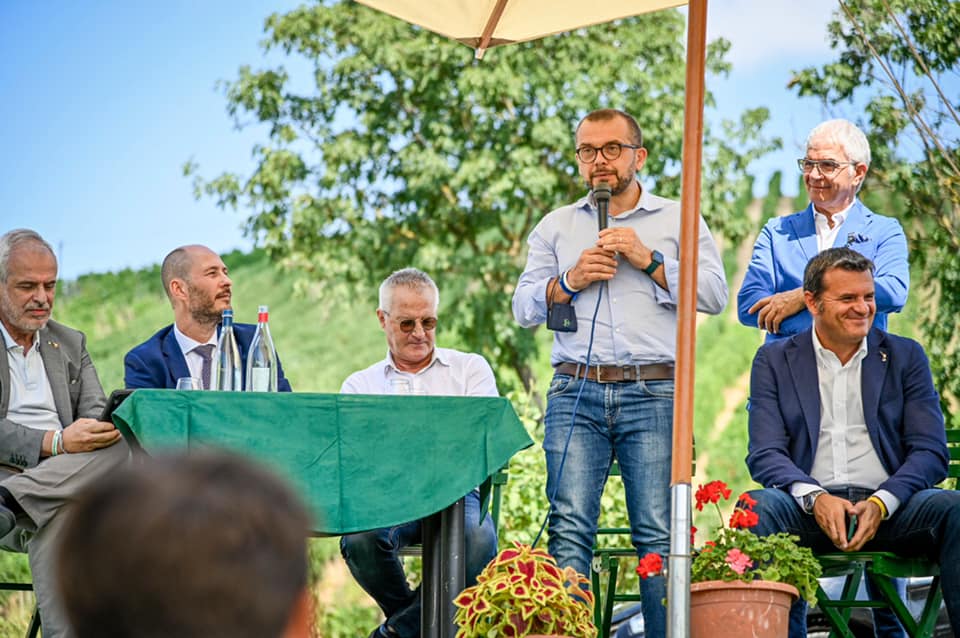 A SINGLEAND COMMON VISION OF THE TERRITORY IS NEEDED - There is still a lot to do, but wine tourism is growing, the passage of the Giro d'Italia has borne fruit," emphasised Councillor Rolfi, " the companies are working with the tourists. We need a single vision and the way forward is quality, accommodation told in a positive way. A new generation with a different mentality is also emerging. By uniting politics and institutions in the area we have helped to give pride and resources to the most important agricultural area in Lombardy.

PRICE OBSERVATORY - The bottle must be sold at a decent price," he added, " and agricultural work must be recognised, it must be profitable. Without a return, there is no promotion, no investment and no accommodation. Hence my proposal to set up a grape price observatory to clarify the cost of production and the price that must be paid. In order to put an end to speculative phenomena favoured by the nebulous system of middlemen that characterises the current price setting system.

BUROCRACY, SACRED BATTLE - Responding to a request from an entrepreneur for greater simplification in terms of calls for tenders, the regional councillor reiterated that withthe green deal at Community level, in the next CAP, there is a risk that the opposite will happen, bureaucracy will increase. For our part, we will do what we can to try to direct resources and reduce obstacles, but with the environmental obligations, bureaucracy will increase.

COMMUNICATING THE EMOTIONS INSIDE A BOTTLE - Today our company has grown in terms of products and we can sell our name in competition with other territories," said Marco Maggi, of the Francesco Maggi farm in Montescano, " which was not possible a few years ago. In order to be successful on the markets, the product and qualitymust be properly communicated.

ATERRITORY THAT DESERVES INTERNATIONAL ATTENTION - There is a need to tell the story of wine starting from theexperience of a territory that deserves to emerge on a national and international level," concluded Federico Gordini, creator of Milano Wine Week, who was present in Montescano, " so that the purchase can be a valid experience for the end consumer.

Manage Cookie Permission
In order to provide the best experiences, we use technologies such as cookies to store and/or access device information. Consenting to these technologies will allow us to process data such as browsing behaviour or unique IDs on this site. Not consenting or withdrawing consent may adversely affect certain features and functions.
Manage options Manage services Manage providers Learn more about these purposes
Display preferences
{title} {title} {title}